This Tropical Traditions Virgin Coconut Oil is a truly unrefined coconut oil. This coconut oil is made on Mt. Banahaw from organic coconuts. Coconuts are used fresh (within 24 hours of harvest) from small family farms on Mt. Banahaw and other rural places in Quezon Province, the coconut capital of the Philippines. The volcanic soil of Mt. Banahaw makes these organic coconuts some of the most nutritionally rich coconuts in the world! Testing done in independent laboratories reveals a 50% - 57% content of lauric acid, and higher levels of phenolic antioxidants than most other coconut oils. The fresh coconut meat is shredded (wet milled), and then cold-pressed to make coconut milk. The milk is then fermented for 24-36 hours, and the oil is then separated and filtered from the curds. No chemical or high-heat treatment is used, and this oil contains no trans fatty acids. We do NOT mass produce this oil. It is made by families who are coconut farmers using old-fashioned traditional methods that have been used here for hundreds of years. Our coconut trees and family producers are certified organic according to strict USDA standards. The families who produce the oil are also trained according to GMP (Good Manufacturing Practice) standards and re-certified each year. This high-grade Virgin Coconut Oil has a long shelf life due to the high anti-oxidant properties.
Tropical Traditions Canada
Virgin Coconut Oil (Unrefined)
Virgin Coconut Oil can only be achieved by using fresh coconut meat or what is called non-copra. Chemicals and high heating are not used in further refining, since the natural, pure coconut oil is very stable with a shelf life of several years. There are currently two main processes of manufacturing Virgin Coconut Oil:
1. Quick drying of fresh coconut meat which is then used to press out the oil. Using this method, the coconut meat is quick dried, and the oil is then pressed out via mechanical means. 2. Wet-milling. With this method the oil is extracted from fresh coconut meat without drying first. "Coconut milk" is expressed first by pressing. The oil is then further separated from the water. Methods which can be used to separate the oil from the water include boiling, fermentation, refrigeration, enzymes and mechanical centrifuge. The method used by Mt. Banahaw Health Products Corp. in the Philippines is the traditional fermentation method. The coconut milk expressed from the freshly harvested coconuts is fermented for 24-36 hours. During this time, the water separates from the oil. The oil is then slightly heated (less than boiling temperatures) for a short time (10-15 minutes) to remove moisture, and then filtered. The result is a clear coconut oil that retains the distinct scent and taste of coconuts. This is a traditional method of coconut oil extraction that has been used in the Philippines for hundreds, if not thousands of years. Laboratory tests show that this is a very high quality coconut oil, with the lauric acid content being 50 to 57%. This oil is not mass produced, but made by hand just as it has been done for hundreds of years. Our coconuts are certified organic according to strict USDA standards. In addition, all of our coconuts are hand-picked within 24-48 hours of harvest. Only those nuts that produce the highest quality coconut oil are chosen, while the rest of the crop is sold to copra dealers. Because of our extremely selective procedure for selecting the coconuts, we pay a higher price to the farmer. Almost all other virgin coconut oils on the market are mass-produced and do not take this kind of attention to detail that begins with choosing the right nuts. Also, the coconuts used to make our Virgin Coconut Oil are grown in very rural areas, generally far away from metropolitan areas. Since coconut trees grow just about everywhere in the Philippines, most coconut oils on the market are harvested from trees in metropolitan areas, because there is less cost to transport them to the place of manufacture. Many of our producers are in areas so remote, that if they did not use their coconuts to produce Virgin Coconut oil for us, no one would buy their coconuts because it would cost too much to transport them to manufacturing plants. 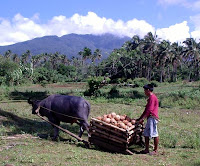 
Posted by Jackie
Email ThisBlogThis!Share to TwitterShare to FacebookShare to Pinterest

When we are ready to make positive changes in our lives, we attract whatever we need to help us.

My Websites and other Blogs